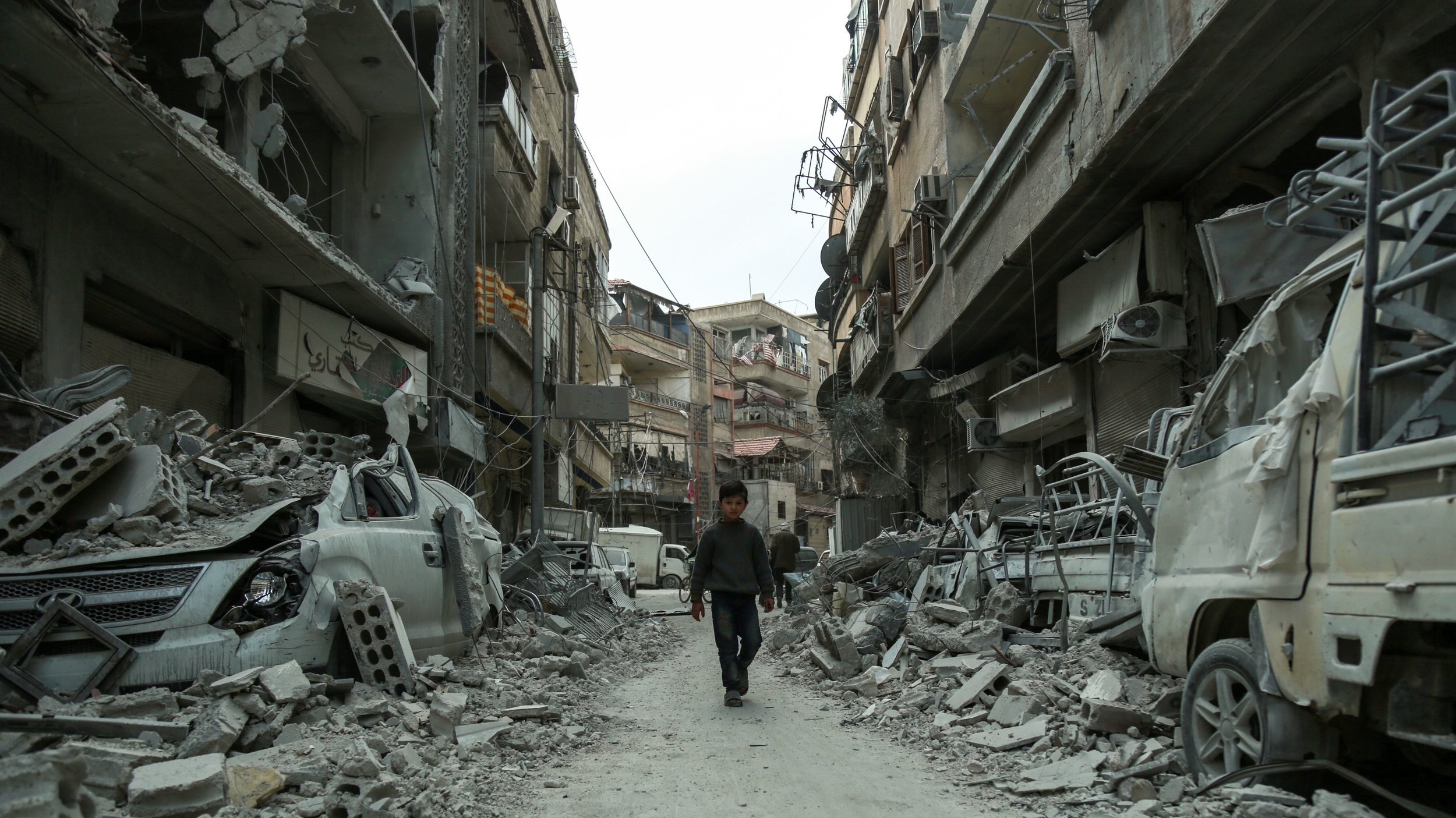 The Syrian Conflict and the Role of the International Criminal Court

Catia Florian, holds a master's degree in Human Rights and Multi-level Governance. This In Focus article is excerpt from her master thesis discussed, in November 2018, under the supervision of prof. Paolo De Stefani.

The Syrian conflict formally began in March 2011, when a series of protests against President Assad erupted in different parts of the country. The protests started after some young boys were incarcerated, after being accused of painting anti-government graffiti, and quickly escalated into an armed conflict between the government and its armed forces and the rebel groups (later organised under the name of Free Syrian Army), controlled by defectors from the official Syrian Army. As of 2019, the conflict is still active, although the majority of the country is under the control of the official government, de-militarised zones have been created by virtue of peace agreements, and small groups of civilians who fled the country are returning to rebuild their home.

In more than 8 years of war, many evidences have been collected on human rights violations being perpetrated by all parties to the conflict. And when atrocities are being committed in one country, especially against the civilian population, the response of the international community to bring justice to the victims and to prosecute the perpetrators is sometimes not too strong. If it is true that accountability and justice can contribute to end the commission of the most serious crimes, prohibited by the international humanitarian and human rights law, why is the international community so inefficient in many cases?

One of the many institutions that has the ability to intervene in such cases is the International Criminal Court (ICC). In fact, since 2002, the International Criminal Court is entitled with the task of prosecuting the most serious crimes, namely the crime of genocide, crimes against humanity, war crimes and the crime of aggression. It also has the broadest jurisdiction, both in terms of the crimes considered and the states over which it can exercise such jurisdiction. Many international actors have invoked the involvement of the ICC as the only international criminal tribunal that could deal with grave cases, as those witnessed in Syria. Even one of the most vocal agency, specifically created by the United Nations to document the violation of human rights in the country, the Independent International Commission of Inquiry on the Syrian Arab Republic, has recommended the Security Council – the only institution that can refer the situation of Syria to the ICC – to do it with urgency.

Nevertheless, obstacles remain: because the Court is made by and of States, and the ratification of the Rome Statute, its founding statute, is elective – meaning that the application of its jurisdiction is for the States to be granted to the Court – it is hard to understand how it could be the most effective mechanism to engage in the persecution of the perpetrators. In fact, the activation of the International Criminal Court in starting any preliminary investigation is subject to other factors, from the provisions provided for by its own statute, to the mechanisms for triggering the Court’s jurisdiction and, finally, the willingness of the States to subject themselves to the Court’s jurisdiction.

It must be underlined that the ICC has never mentioned in its periodical briefings such striking situation, which has even caught the attention of the international community in several occasions for the atrocities that have been committed. And, when it has mentioned the case, it was to underline how its own framework impede them to proceed. The reasons are mainly two. First, the ICC is bound by its founding statute with regard to what crimes and persons it can prosecute: one fundamental obstacle in the case of Syria is that the ICC cannot apply its jurisdiction, being Syria not among the State Parties to the Rome Statute. Second, and as a consequence of the first point, the Prosecutor must wait for an external actor to trigger the jurisdiction, specifically the Security Council. During the 8 years of war the mechanism of the Security Council’s referral was only employed in 2014, but was vetoed by Russia and China, showing the inability of the international community to end the violations of human rights against the civilian population and their impunity, as well as its lack of commitment in developing a peace process. In 2017, this inability was criticised by Carla del Ponte, renowned international criminal prosecutor, when she decided to resign from her role as commissioner in the Commission of Inquiry on Syria. She denounced the stillness of the international community, in that the Security Council was never able to report the situation to the ICC, despite the countless evidences collected by the Commission only.

Nevertheless, it would be possible to understand, in a theoretical manner, what could be the outcome of the work of the prosecutors of the ICC in the context of the Syrian conflict, basing the analysis on the relevant jurisprudence and on previous cases judged by the ICC. In order to do so, it is imperative to understand which crimes have been committed – and by whom – and what elements are required for the ICC to prosecute the perpetrators. In order to do so, a solution could be that of comparing the information retrieved from recognised sources – above all, the Commission of Inquiry – on the crimes committed, and the cases that have already been concluded by the ICC. If the same elements used previously are found in the Syrian cases, then it would be possible to theoretically infer that crimes – as defined in the wording of the Rome Statute – have been committed, and perpetrators must be prosecuted.

One example of a crime widely committed in all regions of the country and by all parties to the conflict is the crime of rape. The Rome Statute has multiple articles related to sexual violence committed as crimes against humanity and as war crimes. Article 7(1)(g) prohibits “rape, sexual slavery, enforced prostitution, forced pregnancy, enforced sterilization, or any other form of sexual violence of comparable gravity”. Articles 8(2)(b)(xxii) and 8(2)(e)(iv) resembling the wording of Article 7(1)(g), prohibit rape, sexual slavery, enforced prostitution, forced pregnancy and enforced sterilization. Rape is defined as the invasion, resulting in penetration, of any part of the body of the victim or of the perpetrator, with a sexual organ or any other object. The act must be committed by the use or threat to use force or coercion, by taking advantage of the coercive environment or of someone who was not capable of giving his or her consent.

Reports on sexual violence have been presented since the beginning of the uprising on March 2011 in every governorate. Evidences collected from refugees in refugee camps show that sexual abuse like rape, sexual torture and gang rape, were perpetrated mostly by the Syrian Army officers; minor incidents were also reported from rebel-held areas and checkpoints. Before the escalation of the conflict, sexual abuses were committed during ground operations and searching operations conducted by government militias on protestors or persons suspected of being members of the armed rebel groups. Moreover, men and women have reportedly suffered from abuse in detention centres. Both men and women were subjected to sexual violence during the admission process to detention centres, during interrogations in order to obtain information, and even after interrogations as a form of deeper humiliation. Women and girls were mostly detained to obtain information about male relatives or because of their work as journalists, lawyers and generally as activists against the Government.

According to the findings of the Commission of Inquiry, these were not isolated accidents, but rather patterns perpetrated on a large-scale: incidents were reported in the governorates of Dera’a, Homs, Damascus, Hama, Latakia and Rif Damascus, Idleb and Homs and for the entire duration of the conflict. The incidents reported by the Commission were also collected by defectors from the government Armed Forces, who described that often officials had full awareness of the crimes being committed, and sometimes they were the perpetrators. In villages and cities controlled by the rebels, reports of such incidents exist although less in numbers. Reports include forced marriages between young girls and fighters of the Free Syrian Army, rape, sexual assaults.

The only case by the ICC related to the war crime of rape is the Bemba case, for which Mr. Bemba was convicted in 2016. The crimes ascribed to Mr. Bemba are rape and murder as war crimes and as crimes against humanity in the context of the armed conflict in the Central African Republic between 2002 and 2003.

Analysing the judgement of the Bemba case of 2016, some elements emerge. The first is that the Court must prove the existence of an armed conflict, and the existence of a nexus between the conflict and the criminal act. The existence of the armed conflict is easy to infer: since 2012, many international actors, and even Syrian President Assad, have publicly recognised the existence of the conflict. The nexus between the conflict and the criminal act is proven by the fact that the reports on rape and sexual violence published by the Commission of Inquiry on Syria and the international organizations are based on testimonies from victims stating how members of the armed forces perpetrated such crimes. This also proves that officials within the Army where able to allegedly commit such crimes in virtue of their presence and their control in the areas because of their involvement in the conflict. The second element is the command responsibility, in fact the ICC main goal is that of prosecuting the most responsible for the crimes under its jurisdiction, namely top- ranking commanders, which will be prosecuted when they are legally or formally or are effectively acting as commander, despite not being legally appointed, both in the case of governmental and non-governmental forces. The third element is that evidences – in the form of oral, written and audio-visual statements, medical certificates, press releases, reports – must be evaluated according to their relevance and probative value to the case. When the credibility of witnesses and testimonies is assessed, the Court establishes the responsibility on the basis of the evidences presented.

To conclude, the International Criminal Court is potentially effective in its founding premises, but concretely has shown that it has to face numerous obstacles and step-backs in its work, mainly due to international relations between states. One possible explanation for that is that this mechanism, as well as many others within and outside the United Nations, is controlled by the same States which participated in its creation. Therefore, the political and ideological interests of States interfere in the proper functioning of the Court.

The Syrian Conflict and the Role of the International Criminal Court - Catia Florian (pdf, 924.77 Kb , EN)