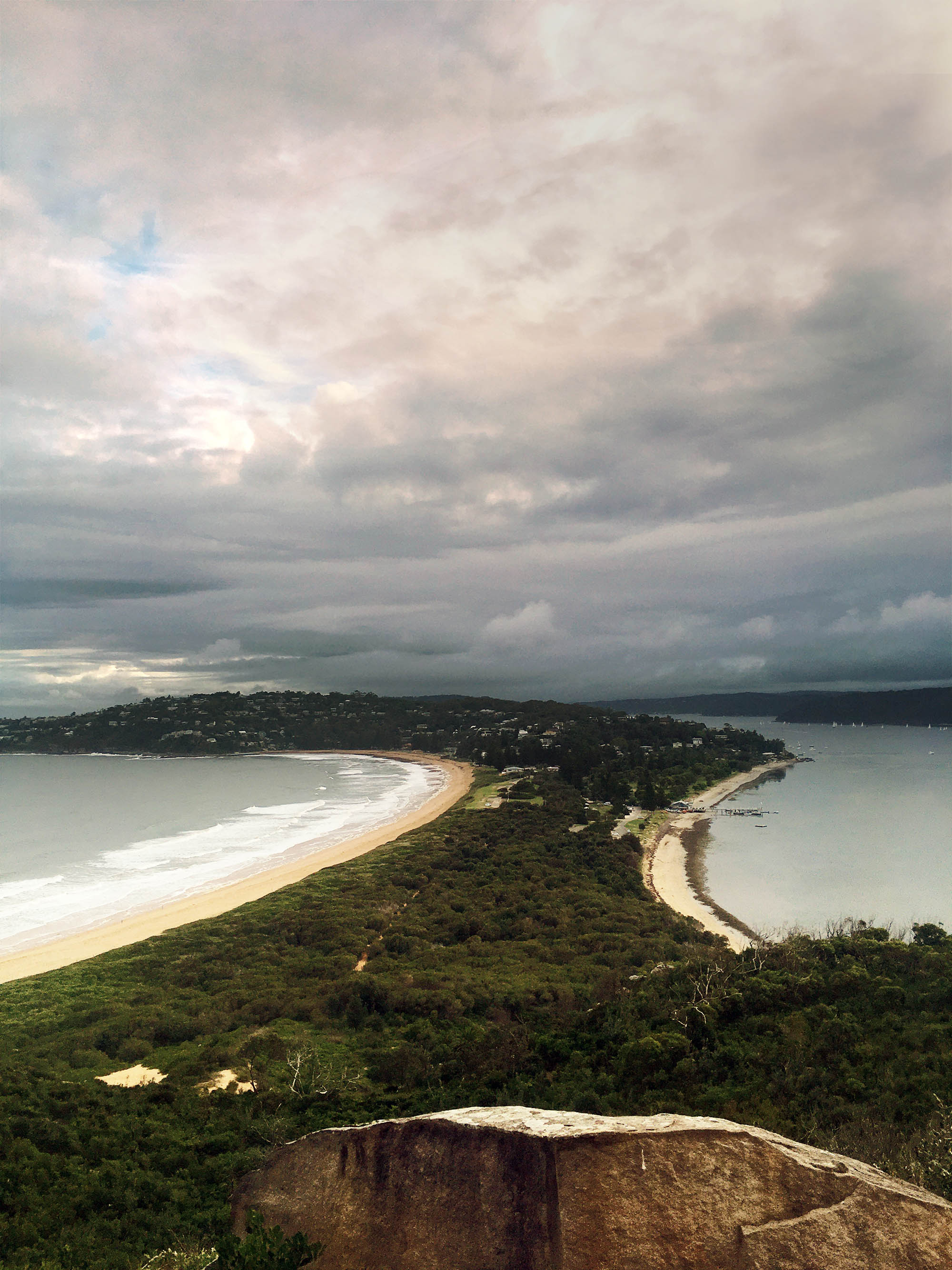 The international and regional response to human mobility in the context of climate change: good practices and global challenges

Chiara Buzzi holds a Master’s Degree in Human Rights and Multi-level Governance from the University of Padova. This In Focus article is an excerpt from her Master Thesis discussed in November 2020 under the supervision of Professor Pietro De Perini.

The year 2020 will be historically associated with COVID-19 as the entire world was dealing with this emergency. The pandemic interrupted months of youth manifestations led by the environmental activist Greta Thunberg asking policy-makers to act against climate change: another huge emergency the world is currently facing. The two issues present several similarities. Both of them begin as an invisible presence underestimated by the majority of people; they are globally endemic as the whole planet is suffering the consequences; they affect with more violence the most vulnerable people; and, finally, they require global solutions and changes in order to be overcome. However, there is no vaccine for the climate emergency. There is an urgent need for drastic changes promoted by international commitment and cooperation. Emergencies are usually dealt with rapid, short-term solutions, but this time long-term solutions are necessary to guarantee long-term changes. Constantly bringing attention to the enormous consequences of climate change through research, data gathering, manifestations, public debates, and conferences are key to convince Governments to address this emergency properly. Multidisciplinary investigations on the relation between climate change and human mobility are limited and need to be carried out at the international, regional and local level. The Icelandic climate activist and award-winning author Andri Snær Magnason wrote that “[t]he crisis has shown us the importance of understanding science and applying it to future realities. Yet, we are slow to learn. Again and again. Tragedy spreads because we don’t believe it will happen to us. [...] Can we translate how global inaction caused immense suffering during the Covid crisis and apply that to the future of the whole planet? Was there anything in this great pause that can show us the way?”. 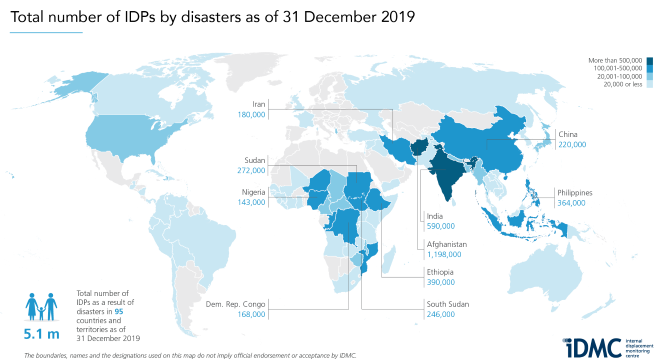 Figure 1. The global dimension of human mobility in the context of climate change.

Weather-related hazards are causing more displacements than conflicts and violence. In 2019 more than 5 million people in 95 States were living in displacement due to natural disasters (Figure 1). Each year around 14 million people globally risk being displaced by sudden-onset disasters alone, meaning flooding, windstorms and wildfires. Slow-onset phenomena triggered by anthropogenic climate change will also increase the number of environmental migrants and internally displaced persons (IDPs) due to rising sea level, increased salinisation of groundwater and soil, long-term effects of recurrent flooding, droughts and desertification. Indeed, anthropogenic climate change modifies the intensity, frequency, duration and location of natural hazards, amplifying the drivers of international migration and internal displacements. People fleeing from environmental disasters usually share three specific characteristics: human mobility in this context is often internal; it is the ultimate and extreme adaptation strategy; and the displacements are usually irreversible as the place of origin becomes inhospitable people are unable to return home. These data demonstrate the urgency of the problem, and at the same time, they reveal how international and regional responses continue to fail. Indeed, human mobility in the context of climate change is a two-speed phenomenon: on the one hand, it concerns the increasingly intense weather-related hazards affecting wider areas of the world, and on the other hand, the slow response at the international, regional and local level.

Three States have been particularly affected by extraordinary weather-related disasters in the last years: the Australian State of New South Wales, the Indian State of Kerala, and California. Indeed, these examples demonstrate the global dimension of the issue, as the climate emergency is now explicitly endangering not only States traditionally affected by natural disasters but wider areas of the world with unseen intensity, triggering forced displacements in unexpected locations. Human mobility in the context of climate change is becoming the new normal, or better said, the new abnormal. 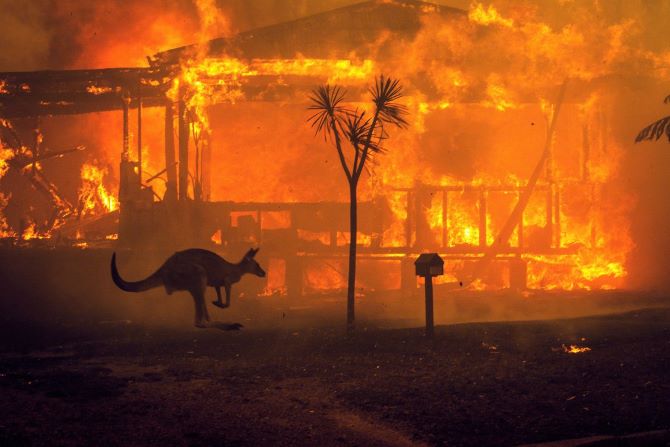 In the last years, India and the United States have always been among the States characterised by the highest number of displacements caused by weather-related hazards. Australia is another important case study as it is part of the Asia-Pacific region, the most disaster-prone in the world. Moreover, in 2019 Australia recorded more than 25,000 new disaster displacements caused especially by the severe bushfire season(Figure 2)that was declared the worst on record and recognised as a consequence of climate change. New South Wales, the State of Sydney, was the most damaged area: more than 3,000 homes were destroyed or ruined. In addition, during February 2020, while I was in Sydney for international exchange, extraordinary flooding affected the city, registering in a few days more than three times the average rainfall for the month of February, while bushfires continued to burn the forests around the city. Jack Rafferty is the founder and director of the Australian Refugee Policy Institute. During the interview, he stated that Australian Governments have been incredibly regressive on climate change, showing a low level of commitment to embrace mitigation and disaster risk reduction strategies. This situation seemed to change during the fires as there was significant public concern about climate change, but COVID-19 shifted the attention, and in his opinion, now the action is less likely. The case of Australia proves that these intense bushfires were the result of poor climate change mitigation strategies. During the last years, Australian scientists and researchers have demonstrated that climate change is going to increase the number of days and severity of bushfires if the Government does not take concrete measures to fight against this issue. A 2007 study did predict that by 2020 the fire season would have started earlier and end later, being more intense than usual, revealing once again that scientific warnings on climate change prove true and continue to be ignored. 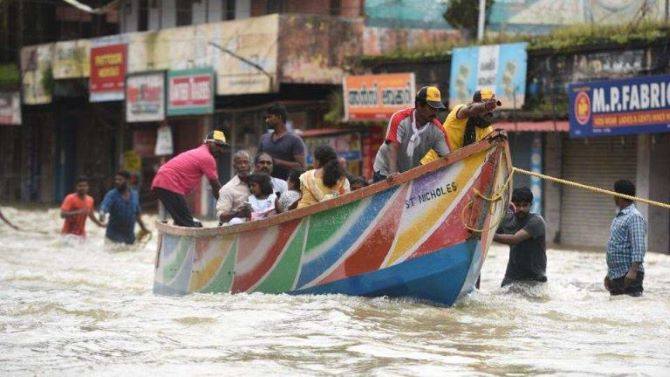 The worst floods in a century hit the South-West Indian State of Kerala in 2018, affecting more than five million persons and evacuating almost 300,000. Kerala environmental activist Tresa Ann was living in the city of Cochin at that time. During the interview, she stated that the Central Government does not recognise the dangers of climate change, and this event demonstrated the lack of preventive mitigation measures as well as unpreparedness in managing the climate crisis. Indeed, the institutional help was inadequate at the point that citizens came together to support the victims, and several fishermen voluntarily travelled to the flooded areas of Cochin rescuing thousands of people (Figure 3). The next year, around 600,000 persons were displaced in India as a result of one of the warmest and wettest years that originated eight powerful storms. This situation, along with inadequate climate change mitigation, disaster risk reduction (DRR) and adaptation strategies, created a dangerous environment. Proper national and local DRR plans along with climate policies according to international guidelines, and the intelligent use of technology are needed in order to reduce the impact of climate change, the vulnerability of Kerala and the number of forced IDPs. 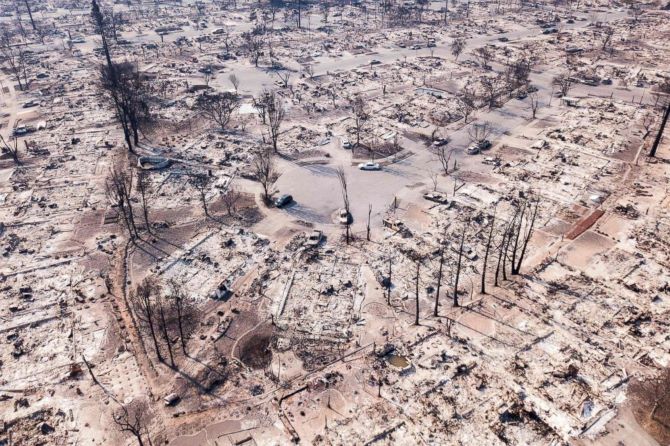 Over the last few years, several wildfires have been devastating California, demonstrating the undeniable correlation between climate change and increased natural hazards. During the last weeks of August 2020, 900 blazes burned down six times as much land as all the State’s 2019 wildfires combined, forcing 100,000people from their homes. Debbie Levine, in the interview, described her experience during one of the most destructive wildfires in California that took place in 2017 in the city of Santa Rosa (Figure 4). The unexpected fire caught citizens and firemen by surprise: a lot of people did not even get a chance to wake up that night. At the basis of this disaster, there is the institutional climate change denial and a huge disconnect between the States and the Federal Government. Federal agencies own the vast majority of Californian forests, but these are not monitored nor cleaned by federal workers, and Californians have no jurisdiction over these lands. Moreover, insurance companies are not insuring people to rebuild, creating a housing shortage, leading to vacant lands where weeds will grow, becoming a fire hazard and forcing several people to leave the State as it is not affordable nor safe to live there. This situation is worsening each year, demonstrating that the phenomenon of environmental migrants and IDPs will not be restricted to places such as Bangladesh and the Pacific islands. The public perception of climate risk has already changed, and the environmental threat now reaches not only the least fortunate and more vulnerable but also the wealthier parts of the global population. Natural hazards are affecting wider areas of the US, and for this reason, citizens that will try to escape from one disaster may run into another. Nowadays, no country has the luxury of ignoring crises outside of its borders as climate change is an issue that affects everyone in the world. 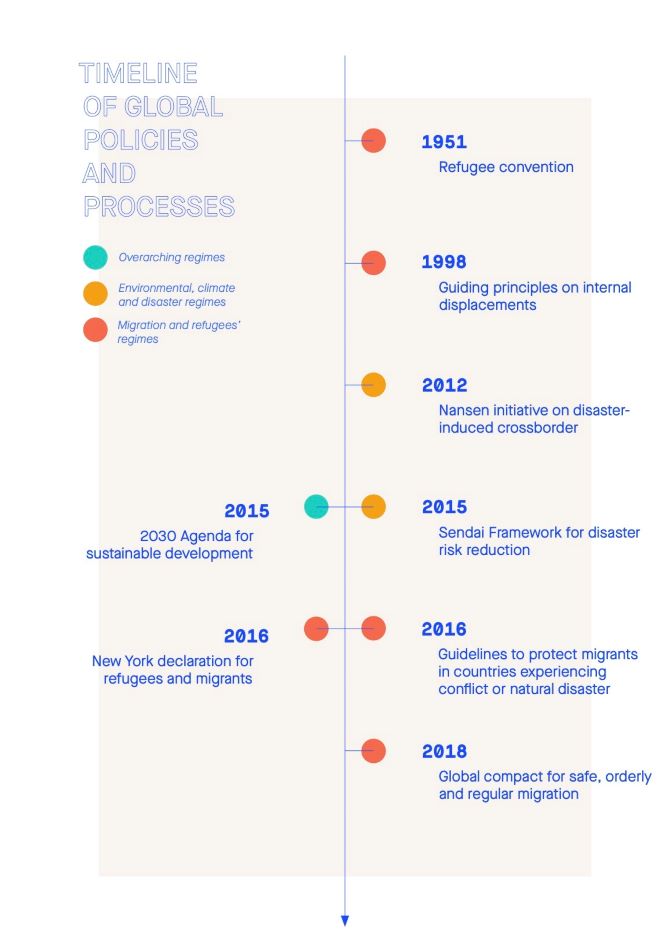 The general institutional response (Figure 5) is not efficient enough to protect environmental migrants and IDPs nor to combat climate change. It is necessary to formulate a shared definition of environmental migrants and IDPs for the international community and policy-makers to develop proper solutions. Some States and regions around the world decided to fill the gap in different ways:

A holistic approach to the issue of human mobility in the context of climate change should consider not only protective measures as an appropriate legal framework for environmental migrants and IDPs, but also preventive measures as disaster risk reduction plans and responding measures as adaptation strategies.

In conclusion, concerted action is needed, and it is necessary to act immediately in order to prevent an announced crisis. Summarising,

The ultimate goal is to reduce greenhouse gas emissions to slow down anthropogenic climate change with the result that people will not be forced to leave their homes. Meanwhile, legal pathways need to be created to protect environmental migrants and IDPs; adaptation and mitigation measures are necessary to alleviate the effects of climate change on risk-prone areas; and disaster risk reduction plans are essential to save lives and to reduce infrastructure and economic damages. Disaster displacement represents one of the biggest humanitarian challenges of the 21st century, millions of lives are at stake, and global changes are needed to guarantee a better future.

The international and regional response to human mobility in the context of climate change: good practices and global challenges_Thesis_Chiara Buzzi (2020) (pdf, 1.27 MB , EN)