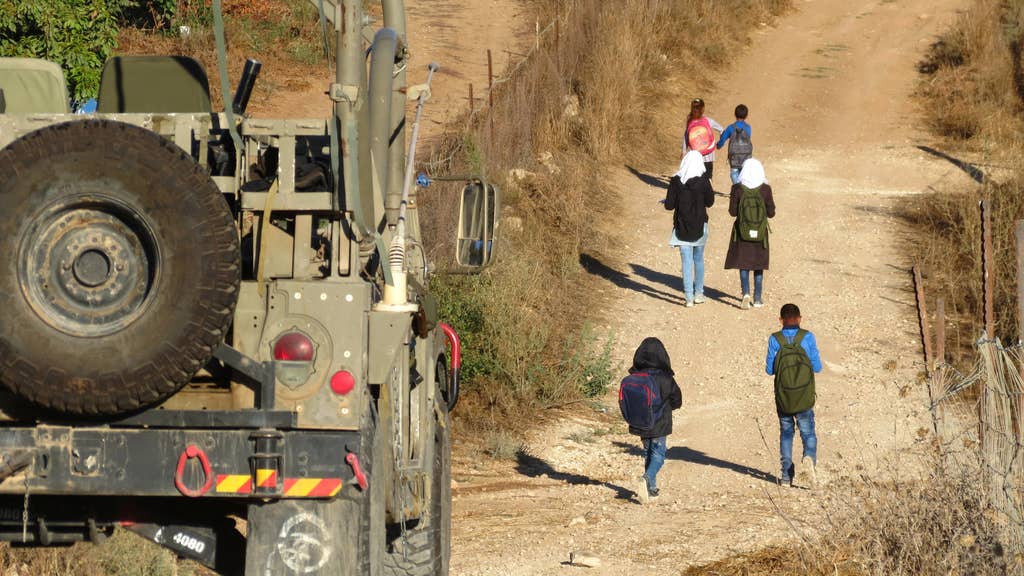 The Resistance from Within: Rethinking the Role of Women in the Contest of the Arab-Israeli Conflict
Civilians Protecting Civilians: A Case-Study of Unarmed Civilian Protection (UCP) of Human Rights in At-Tuwani, Palestine

The right to access education in conflict-ridden and divided societies: Studying in Israel and in the West Bank

Lamia Yasin hold’s a master degree in Human Rights and Multi-level Governance from the University of Padua. This In Focus article is an excerpt from her master thesis discussed in November 2020 under the supervision of Prof. Pietro De Perini.

Education is a multifaceted social, economic and cultural right essential for any individual in modern society. In conflict-ridden or post-conflict societies, communities often place greater educational emphasis on imposing the desired national narrative. The policies applied by each State tend to be part of a governmental agenda that generates, as an outcome, a political action. This leads to a political decision that is likely to hamper the access to the right to education. Said right is perceived not only as a way of investing in qualified individuals, essential for the development of the nation, but also of constructing and boosting national identity while strengthening the society on the basis of integration and critical thinking. However, the nature of this right can be easily manipulated and can potentially become a means of segregation and discrimination.

Israel plays a massive role in the area, both as a belligerent occupant power and as a state with discriminatory domestic policies. Therefore, the regulations, decisions and adjustments regarding the educational system come as a direct reflection of the Israeli government’s agenda. However, Israel is not the only actor to hold decision-making power in the area. Although somewhat limited, the Palestinian Authority has its own policy decision-making process, which affects the educational system of the West Bank.

Challenges and Obstacles to access education in the West Bank

The educational framework of the West Bank is heavily impacted by such a conflict-ridden context. From the first and second intifadas to the present day, educational buildings, economic resources and public infrastructures have been significantly affected by the years of conflict. The areas under the jurisdiction of the Palestinian Authority (PA) are affected by the lack of adequate facilities and resources to invest in education; this right is therefore granted through the assistance of NGOs. These organisations have a crucial role in ensuring access to education for the local population wherever the PA is unable to do so. Also, international organisations such as the EU and UN play a key role in providing resources to constantly carry out the implementation of the right in this area.

In addition, the educational framework is further challenged by the restrictive policies adopted by Israel as an occupying power. An example of this is the settlement policy that is increasingly fragmenting the West Bank and consequently dispossessing Palestinian lands. Together with the rising phenomenon of illegal outposts in the area, this policy represents one of the major struggles for Palestinian pupils in reaching school. The continuous harassment that children face on a daily basis with the complicity of soldiers in order to enjoy their right to education has disastrous consequences. The level of psychological and physical trauma that they experience leads to a high percentage of school dropouts. Furthermore, the security barrier, commonly known as the ‘separation wall’ built at the end of the second intifada, has a massive impact on the freedom of movement of the entire Palestinian population, especially that of students and teachers. The fear of facing continuous harassment, violence and arbitrary detention at the checkpoints and the long waiting times for crossing them have once again traumatic consequences on students and the whole school staff. In addition, the persecution that this community has to routinely face outside schools is compounded by continuous attacks on school buildings.

This conflict-ridden context, dominated by violence inside and outside of schools and within the Palestinian society, has also led to an increase in the number of psychological traumas, thereby raising the percentage of early school leavers.

The Palestinian Authority has evident difficulties enhancing and developing an educational system under its control. For what concerns Higher Education, university students face the same harassment, violence and arbitrary detention from both the Israeli government and the Palestinian Authority, which strongly limit the academic freedom and freedom of expression of faculty members and students.

The responsibility of Israel’s policies in the West bank is undoubtedly affecting the access to education of Palestinian pupils and university students. However, Israel is not the only one to blame; the uncertain political situation in the West Bank, and generally throughout the Occupied Palestinian Territories, together with a lack of resources provided to the PA, is clearly impacting the educational system in the area. Both Israel and the PA are responsible for exercising excessive, intrusive policies control towards Palestinian students. This agenda is nothing but a violation of the fundamental right to education.

Discrimination against the Palestinian minority in the Israeli educational system

For what concerns Israel’s internal dimension, more precisely the educational framework of the country, the notion of identity in a state is essential to understand its political choices. In the last years, the State of Israel has stressed, within the Nation-State Law, the Jewish connotation of the State as a key element. This has, to some extent, declassified minorities as second-class citizens. In other words, 20% of the Israeli population that is composed of Arab-Palestinian citizens, also known as ‘1948 Arabs’, is now considered as manifestly unequal. This evident discrimination against a minority is also shown in the Israeli educational framework, where the separation of society is reflected in the establishment of segregated schools. The system is clearly dividing the population-based on ethnicity and religion, with the adoption of a discriminatory policy against the Arab Palestinian minority. The allocation of resources between Jewish schools and Arab schools carried out by the Ministry of Education is disproportionate. The lack of adequate infrastructures, curricula composition of the subjects and school materials completely deny and neglect the Palestinian history, culture and religion. The structure of the ministerial school curricula is imposing the study of Jewish values and religion on Arab students, thereby undermining the students’ cultural and ethnical identity.  The poor educational system for Arabs in Israel is emphasised by the Jewishness of the State and reflected in the students’ testing scores. In fact, it is less likely for Palestinian Arab students to pass the Bagrut (Israeli matriculation exam, taken at the conclusion of secondary education). This further compromises their chances of accessing university or college. The low percentage of Arab-Palestinians that have access to higher education is a result of the policies implemented by the government.

Israel’s fragmented composition reflects back on the civil society and it is an additional sign of the severe separation between Jewish and Palestinian communities. However, the rising number of Integrated schools or Bilingual schools withheld by NGOs from the segregated Israeli educational system is a positive message. These schools are designed to educate pupils of both Jewish and Arab backgrounds in regard to peace, tolerance and coexistence between these two communities. Aiming to peaceful coexistence by creating these kinds of schools is a significant sign of the improvement that civil society can make in a divided and conflict-ridden context.

Academic freedom and freedom of expression within higher education institutions have been strongly limited in the last decade. The fear of criticism from inside the country as well as from the international community has led Israel to once again opt for restrictive policy measures. Academic freedom in Israel is being backed into a corner. Academic freedom and boycotts are limited by the impossibility to criticise the State of Israel. Criticism is seen by intellectuals and academics as a form of work and could be used, according to the Israeli government, for advocating arguments that are or might be against Israel. This tight control by the Ministry of Education undermines the possibility of attracting academics and researchers from all over the world to participate in the academic life of the country.

The enforcement of biased policies on Israeli society underlines the formal discrimination imposed on minorities, especially the Palestinian one. It could be argued that the discrimination faced by Arab Palestinian citizens of Israel inside the State is quite similar to the one faced by Palestinians in the West Bank.

The vicious circle in which the long-lasting conflict and Israel’s divided society influence each other, meaning that the external conflict heavily influences the internal social Israeli dimension and vice versa, should invert its trend from a negative influence to a more positive one. Education is a means through which the two communities are nowadays pursuing and crystalising their prominent political position to exacerbate such polarisation. Thus, education has been the battlefield for building both a Palestinian and an Israeli citizenship identity. However, is peaceful coexistence possible only through education? Indeed, knowledge acquisition is a crucial tool to open the mind and undertake reflection, especially in integrated or mixed schools and educational projects, but it is not sufficient in itself. The Israeli-Palestinian conflict and the Israeli social structure influence one another and, in order to achieve peaceful coexistence and respect, the promotion of policies and agendas of collaboration and cooperation is necessary on both sides. This should not be the unique responsibility of civil society organisations; indeed, governmental actors should be a part of it.

Education cannot solve the Israeli-Palestinian problem, but it can help to reconcile Israel’s already fragmented society. As stated above, if the internal situation influences the external one, vice versa, there is a small chance that something might change.

The Resistance from Within: Rethinking the Role of Women in the Contest of the Arab-Israeli Conflict
Civilians Protecting Civilians: A Case-Study of Unarmed Civilian Protection (UCP) of Human Rights in At-Tuwani, Palestine