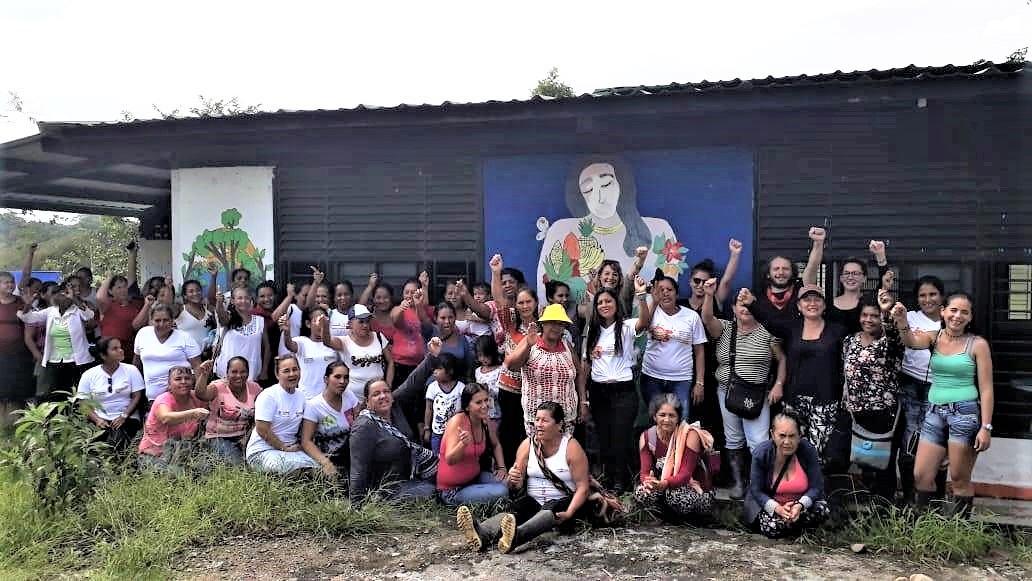 Women’s cuerpo-territorio: a space of domination and resistance against patriarchal extractivism

Michela Lonardi holds a master’s degree in Human Rights and Multi-level Governance from the University of Padova - Department of Political Science, Law, and International Studies. This In Focus article is an excerpt from her master thesis, discussed in March 2020 under the supervision of Prof. Lorenza Perini.

Extractivism has historically marked the economic, social, and political development of many Latin American and Caribbean (LAC) countries, leading to the predatory overexploitation of their natural resources and the perpetuation of multiple cases of abuse against local communities. Despite the recent progressist turn of many national governments, nowadays, capitalist extractivism has been aggressively advanced throughout the region, causing numerous socio-environmental conflicts and the violation of fundamental human rights. In particular, the social and environmental impact of extractivism has severe repercussions on women’s cuerpo-territorio(body-territory). Latin American feminisms have formulated this concept to identify the interrelation between the exploitation of lands and the violation of women’s bodies and rights, as both lands and women are spaces dominated by capitalist forces. However, a new wave of feminism is emerging in the LAC region redefining the cuerpo-territorio as a space of resistance and emancipation against the hegemonic patriarchal structures of power.

Through the analysis of the Colombian case-study and some testimonies of women human rights defenders, this article provides insights into the gendered impact of extractivism. It describes the rise of Latin American women’s movements to stress how women are the most revolutionary agents of change.

The gendered impact of extractivism

In the current conjuncture of neoliberalism and globalisation, extractivism represents an unsustainable, violent, and predatory economic model, which continuously designs new forms of exploitation of nature. In the LAC region, this neo-colonial process of resources extraction and exploitation carried out by national and transnational corporations with the support of governments has profoundly and negatively affected local communities and the environment. As a matter of fact, despite the existence and broad acceptance of international and regional hard and soft law instruments regulating business and human rights, fundamental human rights are severely affected by the resource extraction processes. Local communities, especially indigenous, Afro-descendant and campesino (peasant) peoples, experience the violation of the right to life, health, land, food, work and a healthy environment, as well as limitations to their right of expression, participation, assembly and protest, among others. Practices of natural resources exploitation affect women disproportionately, since capitalism essentially depends not only on the exploitation of nature but also the exploitation of women, as supported by many feminist scholars. Extractivism, in particular, severely affects activities of care and reproduction, such as water collection, food provision, healthcare, and culture preservation, for which women are mostly responsible within their families and communities. As a consequence, women’s burden for care activities increases, which makes them more vulnerable and forces them into the social roles imposed by patriarchy, where men detain the political and socio-economic power, while women are subordinated to them and forced to reproduction roles within the private sphere. Moreover, women are exposed to the sexual, physical, psychological, and economic violence directly caused by extractivism.

“This struggle ultimately affects the bodies of women […] because the system acts in a way which does not only exploit nature, but also our own bodies”. (Rosa María Ballesteros)

In general, extractivism represents a powerful tool at the disposal of capitalism, able to reproduce patriarchal structures of domination over women and their bodies, with deleterious consequences on women’s enjoyment of fundamental human rights. Indeed, capitalism, through extractivism, affects many aspects of women's cuerpo-territorio, strengthening patriarchy in multiple dimensions of women’s life. The most direct impact is on the ecological dimension, as women are bearing increasing burdens to take care of environment-related issues such as health problems, food scarcity and water contamination. It directly or indirectly aggravates the gender-based violence, which belongs to the corporal dimension. As regards the economic sphere, extraction-based economies promote men’s role of breadwinners relegating women in a position of economic dependency. Additionally, extractivism affects the social and cultural role of women and promotes the strengthening of sexist stereotypes. Finally, it has a considerable impact on women’s political dimension, as it excludes them from decision-making processes and exposes female leaders to acts of stigmatisation and criminalisation. This impact on women’s role and life clearly foster a process of repatriarchisation and masculinisation of territories.

“We are life creators and important agents in the territory. Our responsibilities are not limited to the house, our participation and struggle are integral and vital for the development of our municipality”. (Linda Oneida Suárez Sánchez)

In front of the violence against their cuerpo-territorio, women have raised their voice and organised themselves to resist subjugation. Extractivism has fuelled the explosion of numerous socio-environmental conflicts throughout the LAC region, with women from indigenous, Afro-descendant and peasant communities at the forefront of the struggle against governments and extractivist corporations in defence of freedoms, rights, and the commons. Women defenders have multiplied experiences of mobilisation and aggregation at the local, national, and regional level, and fomented new dialogues and feminist practices. This new wave of feminism is reshaping the dominant capitalist, colonial, and racist narrative and reconceptualises the idea of cuerpo-territorio, recognising the central relevance of this relationship as space of resistance and struggle against the hegemonic system of the capitalist economy, where the parallelism between territories and female bodies marks a strict bound for a common bidirectional and mutually reinforcing struggle, and where women are no more victims, but rather agents of social change.

“Women’s resistance is not only a fight against exploitation companies, but also against the patriarchal model that oppresses and underestimates women’s opinion regarding the exploitation of mining and energy resources and political discourses”. (Linda Oneida Suárez Sánchez)

The feminist process of socio-environmental struggle encompasses both traditional and innovative mobilisation strategies, such as marches, campaigns, popular consultations, public denunciations, and art performances, which aim not only at resisting capitalist forces, but also at creating alternative paths of reproduction of life and resilience in the territory. Women propose political and socio-economic alternatives to capitalist logic and practice, based on a feminist perspective and able to promote environmental protection and gender equality. Women build new models of production and reproduction based on anti-capitalist, anti-hegemonic, anti-racist, and anti-colonial relations. They promote horizontal, participatory, and cooperative spaces, which purpose is the protection of the community and the environment, the enjoyment of human rights and fundamental freedoms, as well as the fulfilment of self-determination. Their proposals are grounded in the enhancement and collectivisation of women’s reproductive role for the defence of the commons and the promotion of inclusive and sustainable development. These alternatives emerge from the direct experiences of women, who propose practices based on the fundamental interrelation between the body and the territory. For instance, some indigenous women actively promote a new economic and political model called Buen Vivir, which is grounded on the principles of social solidarity, shared reproduction activities and the protection of nature. It is considered “a good life that is not a new instrumental development alternative, but an alternative to the whole western idea of development”.

“It is absurd that we continue to play the game of globalisation. I believe that development must be local […] based on a gender-perspective […], where starting from the recovery, conservation and protection of natural resources, a sustainable use can be achieved”. (Estefany Johana Grajales Marín)

Paths of resilience from Colombia

Nowadays, Colombia is one of the countries most affected by neo-extractivist practices and socio-environmental conflicts. Observing the developments in the political economy of the country over the last two decades, what emerges is that the governments of President Uribe, Santos and Duque have strongly favoured the progress of extractivism in the country. This neoliberal capitalist market approach has been favoured through processes of extractivist practices legitimisation, work flexibilisation, and environmental deregulation, enriched by the grant of fiscal benefits, judicial protection of investments and increasing negotiation opportunities. This approach is also confirmed by the contradictory legislative and judicial framework regarding the protection of the environment and the promotion of democratic participation. As a matter of fact, on the one hand, laws and jurisprudence favour the perpetuation of exploitative practices. On the other hand, they promote the protection of land and peoples’ rights to participation to processes of free, prior, and informed consultation. This framework accompanies multiple extractivism-led violations of human rights that have fomented the explosion of numerous socio-environmental conflicts, with indigenous, Afro-Colombian, and campesino women defenders at the forefront of the struggle against mega-projects affecting their territories.  Despite the multiple gendered risks to which they are exposed, these Women Human Rights Defenders (WHRDs) have raised their voices intending to raise awareness about the impact of extractivism and denouncing the idea of development imposed by the capitalist market, in order to concretely obstruct extractivist domination and guarantee people’s permanence on the territory.

“Today, women have taken the lead”. “We are the ones who have to challenge the state and say that we are present (...) [to] defend this space of life”. (Nidiria Ruíz Medina)

Beyond the defence of their cuerpo-territorio, these grassroots women’s movements also propose political and socio-economic alternatives grounded in their feminist perspective and differentiated experiences of domination. For instance, their models of feminist economies are based on the communitarian management of common goods, the recovery of traditional agricultural processes and native seeds, the protection of agro-ecological areas, and the strengthening of small-scale local markets. They further promote the dissemination of ancestral and environmental education, the preservation of popular knowledge, as well as the improvement of sustainable practices. They ultimately promote self-organisation and inclusive political processes based on more horizontal democratic relations and increased the community’s awareness and participation in decision-making processes.

“It is our duty to promote women’s organisation, their association, their training and qualification, their advance in scenarios of prominence and political dispute, because only in this way we will advance the guarantee of rights”. (Rosa María Ballesteros)

The social and environmental impact of extractivism is a major concern in the LAC region, especially for women who are more exposed to the severe consequences of this predatory economic model of accumulation. The impact of extractivism on territories has indeed disproportionate consequences on women and their bodies compared to their male counterparts, given women’s reproductive role that inevitably connects them to the territory, as both sources of life and reproduction. In this context, as previously explained, extractivism contributes to the strengthening of patriarchal structures of power over women’s cuerpo-territorio. However, through collective efforts, and thanks to their feminist, communitarian, and local perspective, nowadays Latin American indigenous, Afro-descendant and campesino women have reversed their subordinated position and constitute a strong counterpower able to tackle the existing hegemonic structures of capitalist power. They indeed define anti-hegemonic, anti-capitalist, anti-colonial, and anti-racist political and socio-economic paradigms, able to tackle patriarchal violence and aimed not only at the protection of human rights and the environment but also at the promotion of gender equality. In the words of Silvia Federici, “grassroots women’s communalism today leads to the production of a new reality, shapes a collective identity, constitutes a counterpower in the home and the community, and opens a process of self-valorisation and self-determination”. Women are definitely “re-enchanting the world”.