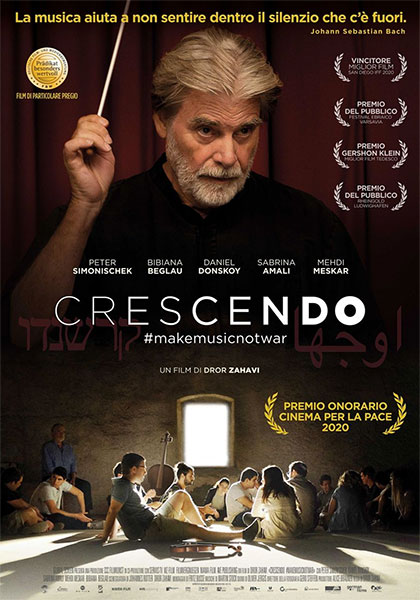 The highly anticipated film Crescendo - #makemusicnotwarby Israeli director Dror Zahavi was released on 27 August at the cinema and will be shown in Padova at the MPX MULTISALA PIO X cinema.

Winner of the Cinema for Peace Award 2020 and numerous awards at international festivals around the world, Crescendo has already struck both the public and critical hearts and has been described as "a strong and touching work on the reconciling power of music", "a film that challenges cultural, religious and political conflicts and brings music to the forefront by putting art above all else".

Freely inspired by the history of young orchestras composed of Israeli and Palestinian musicians, the best known of which is the West-Eastern Divan Orchestra founded by Maestro Daniel Barenboim and scholar Edward Said, the film Crescendo exalts the value of music as an art that brings together thanks to the universality of its language.

Dror Zahavi's film traces the story of Eduard Sporck, a famous conductor who was commissioned to put together an orchestra composed of young Israeli and Palestinian musicians for a single concert during the peace negotiations between Israel and Palestine. Sporck has to provide all his skills and resources to overcome the tensions and discords that oppose them ideologically and culturally in order to lead them to play in harmony towards a tense and exciting finale.