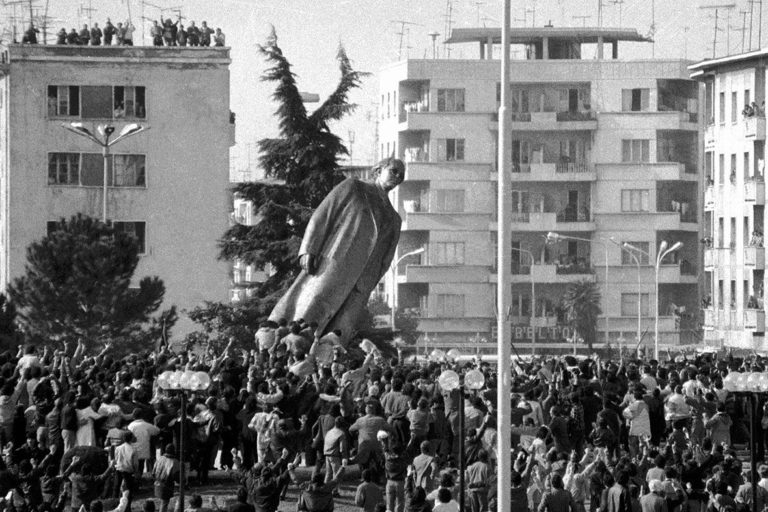 Dealing with the past: Post-communist Transitional Justice in Albania

Sidita Trimi holds a Master’s Degree in Human Rights and Multi-level Governance from the University of Padova. This In Focus article is an excerpt from her Master Thesis discussed in March 2021 under the supervision of Professor Costanza Margiotta Broglio Massucci.

Coming to terms with the past has proven to be one of the most perplexing issues in the field of transitional justice. The transitioning countries are confronted with the daunting task of establishing the truth about past human rights violations, holding perpetrators accountable for their crimes and starting the reconciliation process so that former conflicting parties can learn to co-exist in a new democratic society peacefully.

Since the beginning of 1991, Albania has tried to emerge from a dark period of dictatorship and transition towards a consolidated democratic system. It has attempted to deal with a legacy of large-scale past abuses by adopting a combination of judicial and non-judicial transitional justice mechanisms, including criminal prosecutions, reparation programs, lustration laws, institutional reforms, which have been prevalent during the early phases of transition.

After the collapse of the communist regime in Albania and the victory of the Democratic party in the country’s multiparty elections, the new government embarked on a mission to redress gross and systematic violations of human rights, bring perpetrators of atrocious crimes of the communist era to trial, foster societal reconciliation, and establish a democratic regime based on human rights and fundamental freedoms.

Institutional reform includes efforts to transform the state institutions such as the judiciary and law enforcement agencies (police, military, military intelligence) from institutions of repression and corruption into institutions that promote accountability, respect for human rights and the rule of law. It also aims to restore civic trust in public institutions and acknowledge victims as citizens and right holders.

During its early phase of transition, from 1991-1997, Albania underwent significant institutional reform by transitioning from a one-party system to a multiparty system. It also adopted a new constitution that recognized fundamental human rights and restored the right to private property, which has been strictly forbidden during the communist regime, alongside decentralization of state-owned agencies and separation of powers.

Since the end of the Cold War, the concepts of ‘transitional justice’ and ‘decommunization’ have been used interchangeably to describe the wide range of inter-related processes of coming to terms with the recent dictatorial past in post-communist Eastern Europe and the former Soviet Union.

Decommunization, which has often been referred to as political cleansing, is the process of dismantling the legacies of communist state establishments, culture, and psychology in the post-communist states. This process has been decisively influenced by the willingness of the new (or not so new) political elites to initiate and assume judicial and political steps towards historical and legal accountability regarding a traumatic, violent, and brutal past.

The study of decommunization is examined in three levels: first, lustration as a means to temporarily or permanently ban from public office members of the communist party bureaucracy and secret police officers and informers; second, ordinary citizens access to the files in secret police archives; and third, trials and court proceedings launched against former high-ranking communist officials and secret police officers charged with gross human rights violations or crimes of a similar nature.

By 2000, all Eastern European countries but war-torn Yugoslavia passed lustration laws on banning communist officials and secret agents from post-communist politics along with rules that regulated access to secret files compiled by the communist state security services (Stan 2009, p. 8). The laws and implementation varied from country to country.

In the fall of 1995, the Albanian parliament adopted two lustration laws for the vetting of public officials who were found to have collaborated with the regime; however, its implementation was flawed and politically motivated. The lustration process was inspired by political vengeance and was followed by purges of political opponents. 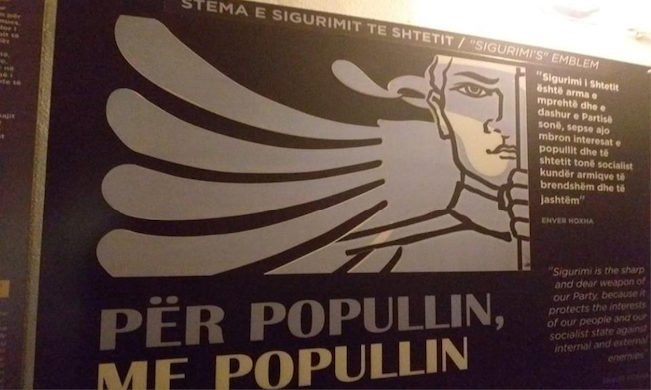 In Eastern European countries, the debates for decommunization have centred on the Communist Party and the infamous state security police, which was used as an instrument of repression in all former communist countries. The police kept the general population under surveillance by preparing and storing files for anyone suspected or targeted by the communist party as a “social threat”, that is to say, groups of pre-communist political leaders, anti-communist dissidents, people suspected of being pro-Western and ordinary citizens.

East Germany has been the first country to grant full public access to Stasi files in 1991. While Albania reluctantly agreed to open some files only in 2006 (Stan 2009, p. 8).

In 2015, the law On the Right to Information on documents of the former State Security was passed. The law provides the affected person with the right to learn the true name or alias of the ex-security personnel who prepared the file that would lead to the person’s conviction, along with other evidence used in the preparation of the file. Apart from the affected persons, the law also grants the right to information to those who have been collaborators of state security, those who held favourable positions and their heirs and to research institutions and media. However, the information contained in the state security files in Albania has never been publicly disclosed. This, in turn, has made it difficult for ordinary citizens to engage in debates about the past and to challenge the dominant and self-constructed narratives of the past provided by the post-communist governments.

Moreover, archival sources estimate around 29,000 files destroyed over the years 1980-1992, which amounts to 75% of the documents at the time. The former Director of the archive of the Interior Ministry has confirmed that during the communist era, 90% of the files were destroyed every five years as a routine practice, along with other files that could compromise the integrity of former state security collaborators.

As such, considering the disproportionate number of remaining files, it is arguable whether the information contained in them would help bring to light the “black holes” in Albania’s dark chapter of history under the communist regime.

The trials against former communist officials sought to identify and hold accountable perpetrators of serious human rights violations carried out under the communist regime, from 1945 to 1990. However, like their counterparts elsewhere in Eastern Europe, in Albania, too, trials for financial misconduct or corruption, rather than for the brutal crimes of a totalitarian system, have dominated the process. These quick trials gave senseless sentences based on ridiculous charges given the seriousness of crimes committed by the communist regime.

Berisha, the president of Albania at the time, explained that besides practical reasons for giving priority to economic crimes over political ones, he firmly opposed political trials because “every day under Hoxha regime a show trial was held somewhere in Albania, with false witnesses and so-called judges who had the written verdict in their pockets before they went into court.  If we were to bring such people to trial, we would be forced to build more prisons and camps than there were in Hoxha’s day.”

However, the prosecution of former communist officials was difficult for two reasons: first, they had not broken any laws under the communist legislation at the time, legislation that they had drafted and enacted themselves, and second, because gathering evidence about the crimes committed during the 45-years long regime, was almost impossible because of insufficient evidence or lack of it.

All in all, the decision to hold former communist officials accountable for their economic crimes over political crimes was “a catastrophic blunder” because, in essence, it declined people’s trust in governments’ commitment to decommunization, and it failed to restore citizens’ trust in justice and public institutions.

Transitional justice is rooted in accountability and redress for victims. For this reason, the state undertakes measures called reparation programs to redress gross human rights violations, by providing a combination of material and symbolic benefits that range from financial compensation, restoration of victim’s dignity, rehabilitation, official apologies, memorialization efforts, guarantees of non-repetition.

The first law that addressed the status of political prisoners of the communist regime was passed in 1993 (Law 7748/1993), and it defined political persecution in its Article 2 as “any act of omission…that caused the loss of life, liberty, civic liberty, kulak designation, deportation or any other deprivation of the participation in the political, economic and social life of the individual because of individual’s convictions and/or political or religious attitude.”

In late 1991, the government began to release political prisoners in substantial numbers. Their release posed new challenges for the government at the time, concerning their reintegration into society, recognition of the years of prison, employment, and housing, among others. In order to address these challenges, in September 1991, the government passed an Amnesty law to “apologize, proclaim innocence, amnesty and rehabilitation of the former political prisoners and former persecuted people.” This law was significant because it was the first law that dealt with past state crimes immediately after the fall of the regime, and it sought to rehabilitate and provide financial compensation for the reintegration of politically persecuted in the post-communist society.

However, the application of the law throughout the years has been fragmented and inconsistent. In interviews conducted with former political prisoners, they’ve highlighted the government’s reluctance to provide financial compensation, punish the crimes of the communist regime and the failure to property restitution (Kamolli 2020, p. 41). As a result, only some measures of material nature were implemented, far from “full reintegration in society.”

The gap between the law and its application has caused frustration among former persecuted people who still find themselves at “the bottom of the food chain”. As a former political prisoner stated, “There is no treasury in the world that can pay for our lost youth and our sufferings. However, it is a moral obligation of the state to compensate us, that should be commended.” (Kamolli 2020, p. 42).

While it is arguable whether the process of rehabilitation of former political prisoners is considered completed from the governmental standpoint, the State Supreme Audit has found that from 1991 to this day, “only one in sixth of former political persecuted have remained alive.” (Vukaj 2019, p. 23) The OSCE’s research found that from 2014 to 2020, most political prisoners have received their financial compensation in up to 10 instalments, and the process for compensating family members of victims is in progress (Kamolli 2020, p. 37). According to the same source, only one out of the 20 interviewees has not received the financial compensation.

The Trajectory from dictatorship to democracy

The transition of former repressive regimes to democratic societies does not happen overnight. As Huntington noted, “the death of dictatorship did not ensure the birth of democracy” in several countries in transition.

The experience of new democracies suggests that the process of assuming the dictatorial past represents the key to building a stable, legitimate democracy (Stan 2009, p. 2). In the same vein, several scholars have argued that it is impossible to reach the state of a consolidated democracy without an honest reexamination of the past which would bring justice to victims and closure to victimizers (Stan 2009, p. 2).

In Albania, the deeply politicized and underdelivered decommunization policies on the one hand, and the fragmented and inconsistent application of reparation measures towards victims of the regime on the other, had a catastrophic implication for Albania’s overall transition from the dictatorship to a consolidated democratic system. In addition, the relationship of right-wing and left-wing parties with the communist past and the existence of weak civil society organizations to represent the interest of formerly persecuted people were major reasons why transitional justice measures were not successfully implemented.

At the societal level, public debates about the past initiated very late due to the government’s deliberate attempts to silence the past and use it for political advantages. Consequently, Albanian society continues to struggle with the communist legacy of injustice and inequality that pervades the political and societal structures in the present.