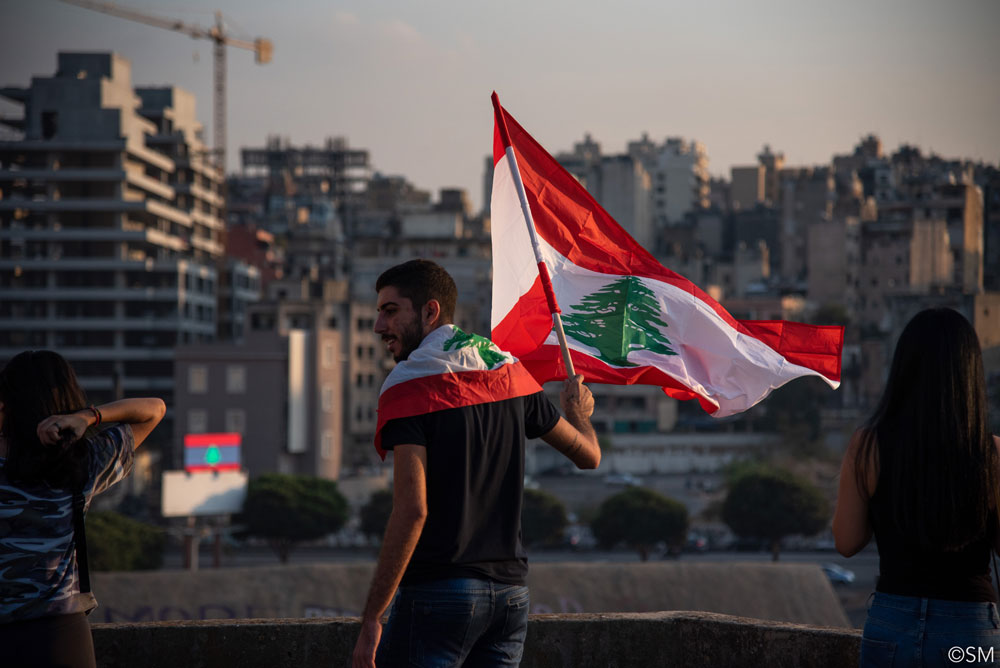 In Lebanon, People are taking back what belongs to them: Unity, Rights, public Spaces

Suddenly, what started as a small group of people going to the street to protest against the decision of the government to put a monthly 6$ tax on calls via Internet (Whatsapp, FaceTime…), turned into a huge peaceful demonstration that attracted people from all walks of life and backgrounds. Their common aim, that overcome every political and religious separation, is a change in the leading privileged and corrupted political elites. With the words of a young Lebanese-Palestinian woman, “We are sick of them. All these taxes that we have to pay, and we do not see anything in return. We want them to resign”. To face a deep economical crisis and a rising public debt (Lebanon is one of the most indebted countries in the world) the government increased taxes on common goods, and the so-called “Whatsapp tax” was just the last drop on the austerity measures put in place. Apparently, the high cost of life and the taxes that Lebanese pay have not turn into any real improvement of infrastructures, health and education systems, provision of basic services like water, electricity 24/7, or changes towards a recycling system and measures for the protection of the environment. On the contrary, the political parties governing the country (businessmen/politicians profiting from their positions) have tried to maintain the sectarian and religious divisions in place. In Lebanon there are officially 18 different religious sects, the most relevant being Muslim Shias, Muslim Sunnis and Christians (divided into different sects).

But this seems to be the biggest change in this “revolution”: people are going to the street without any party flag, the only flag that you can see waving in their hands is the Lebanese flag. People chant and have created slogans against all the political leaders. “Kellon ya’neh kellon!”, all of them means all of them. What they sing is the Lebanese anthem. Among all things they are demonstrating for, people seem especially sick of the reiteration of separations along religious lines (as an example, civil marriage does not exist in Lebanon, people from different religions usually go to Cyprus to get a civil marriage). 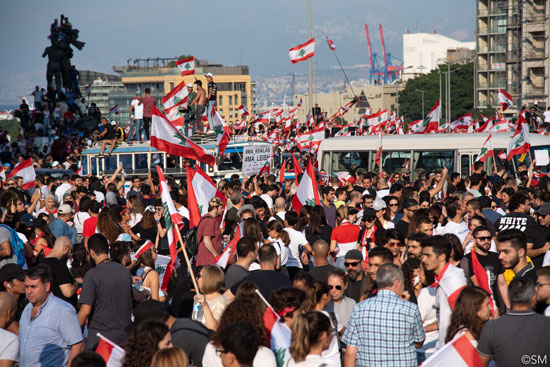 All this mix of feelings, anger, and also hope, resulted in a huge series of peaceful demonstrations, that have been taking place not just in the capital but also in other cities all over the country, also in places where protests against the political leaders were usually uncommon. Just in Beirut, last Sunday reports said that there were above 1 million people, some say even 2 millions (Lebanon has around 6 million inhabitants, so this can let you grasp how big this number is). There have been also clashes, especially in the first two day. On Friday 19th, during the second day of protests, in Beirut people started to block streets with fires and burning tires, destroying shop windows and damaging high-end buildings under construction. Sadly, two Syrian workers that were sleeping in one of this building died. A candle-lighting was then organized in the place where the accident happened.

However, Saturday 20th people went back to the main square of Beirut and to the streets of the city center, motivated to show that the protests wished to be peaceful. Women, children, old people, families, everyone was on the street. To discourage any attempt of violence against the riot police, in front of the seat of the government a group of women created a line between the police and the protesters. The “Front Line Girls” prevented turning the beautiful peaceful public demonstration into any attempts of violent clashes. 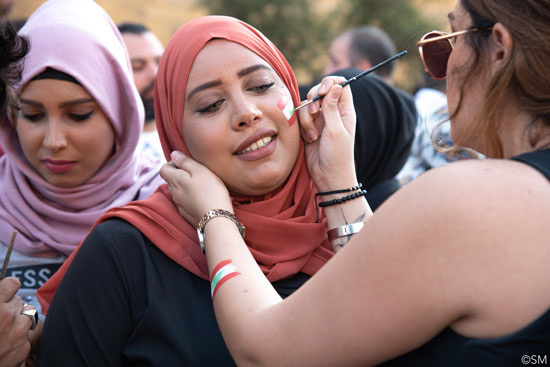 Over the last week, during the first 8 days of protests, in Beirut it was a PARTY! Trucks everywhere with different music, DJs, drum-players, people dancing Dabke (a traditional Lebanese dance), people smoking shisha (narghilè), people making barbecue and selling any type of food. And you could spot also amazing signs of kindness and mutual support: people distributing water for free (it’s still summer-weather here), AUB Medical Center (American University of Beirut) creating a stand open 24/7 with their doctors and students providing first aid support if needed. Volunteers even started a cleaning campaign to collect the trash left on the streets during the demonstration, to show how civilized a revolution could be.

Beautiful buildings that were damaged during the civil war (1975-1990) and then closed to the public, were taken back by the people. A stunning theatre and a cinema named “The Egg” for its peculiar shape have become privileged viewpoints to observe the demonstrations unfolding in the streets, finally open to everyone, giving the chance to the people to take photos and selfies, climb, skate, wave the flag and observe the demonstration. Beirut downtown, that after the post-civil war reconstruction became a high-end, expensive, off-limits area, has been taken back by the people, claiming their right to inhabit public spaces to meet, demonstrate, walk, dance and sing. The streets are alive, people are walking everywhere, there are more people than cars in the streets (traffic and air-pollution is a major issue in Lebanon), and the walls of the city have started to be painted by street artists. The word Thawra (Revolution) can be read everywhere.

The proposal issued on Monday 21st by the prime minister (Saad Hariri) was not welcomed by the protesters, that vowed to stay in the streets until the government resigns. “We are not going to leave until they leave”. So, schools, universities, banks and other offices are closed, protesters are blocking the main streets and highways with tents and barricades, and people and students keep spending their days in the streets and squares. Some university professors even organized classes in the main square instead of at the university, and other groups are organizing public debates and meetings to discuss about the situation and the next steps that could be taken. The old cinema “The Egg” gained back its original role as a meeting-place, and has become a public arena for political debates.

It is beautiful. Nobody knows what is going to happen next, but something like this has never happened. People hope that the movement will manage to keep being peaceful, and that it will maintain its striking power of uniting people together. People on the streets and Lebanese people of the diaspora living abroad keep sharing on social media their messages of pride and support for what is happening in their country.

It’s beautiful, and it’s amazing to witness such a powerful social uprising.

Lebanon is experiecing a social revolution - Al Jazeera
Their city lacks public spaces for protests, so Beirut residents made their own - Los Angeles Time