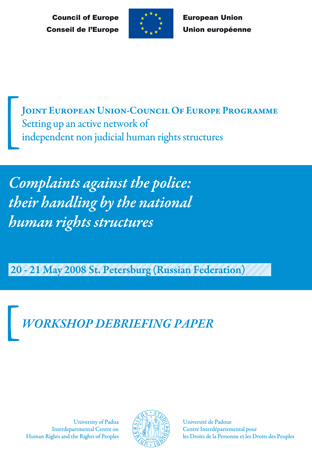 Complaints against the police: their handling by the national human rights structures

Themes and aims of the workshop

Introduction
Co-financed by the Council of Europe (CoE) and the European Union (UE), the “Peer-to-Peer Project” consists of a work programme to be implemented by the Council of Europe’s Directorate General of Human Rights and Legal Affairs (DGHL). The main tool of the programme is the organisation of workshops for staff members of the National Human Rights Structures (NHRSs), in order to convey information on the legal norms governing priority areas of NHRS action and to proceed to a peer review of relevant practices used or envisaged throughout Europe.

This workshop was organised in cooperation with the St Petersburg Humanitarian and Political Science “Strategy” Centre2 on 20-21 May 2008, in St. Petersburg (Russian Federation). It was the second workshop organised within the framework of the “Peer-to-Peer Project”.

The following experts contributed to the workshop: the UN Special Rapporteur on torture or other cruel, inhuman or degrading treatment or punishment, the Irish Human Rights Commissioner, representatives of the Committee for the Prevention of Torture (CPT), the French National Commission for a Security Code of Conduct (CNDS), the Hungarian Independent Police Complaint Commission, the World Organisation against Torture (OMCT) and a member of the Academy of the Ministry of the Interior of the Russian Federation.

Themes and aims of the workshop
The topic under consideration constitutes one of the priority themes of the Commissioner for Human Rights. As the Commissioner noted “In a democratic society the police must be accountable and open to public scrutiny. Complaints about ill-treatment and misconduct by the police must be investigated effectively and in a transparent manner to ensure that the police enjoy the confidence of the public. Currently, there is a variety of different mechanisms for investigating police complaints in the member states of the Council of Europe. A few countries have set up bodies operating separately from the police. Many countries entrust public prosecutors to lead and supervise investigations carried out by the police. Another model is to have teams with specialised prosecutors and police officers. Several European states are also in the process of reforming their current procedures”.

The first session was dedicated to the United Nations (UN)6 and Council of Europe norms and findings related to complains against the police in the Council of Europe member States. A special emphasis was put to the case law of the European Court of Human Rights (“the Court”) and the Commissioner’s reports, as well as to the reccomandations of the CPT.

The discussions than focussed on the need to find the best way to handle efficiently complains against the police, using the existing structures (session 2) and exploring the need for creating or not new specialised structures (session 3).
As a follow-up to this event, it was decided to produce this workshop debriefing paper, which is sketched out around the three sessions of the workshop.
The publication aims at summarizing the findings of the workshop and at providing practical information on the topic to the NHRSs, as well as references to documents concerning the role of NHRSs in dealing with complaints against police.

Complaints against the police: their handling by the national human rights structures (Stefano Valenti - 2010)