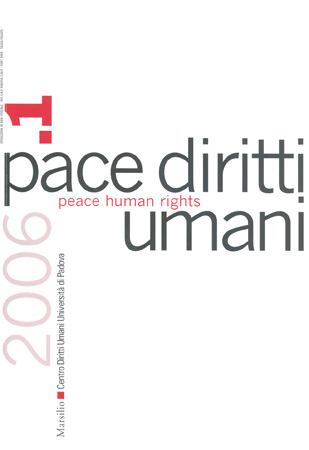 The EU Strategy on the «Human Security» Track, a Potential to Quickly Carry Out

In the security field, which is rapidly evolving also from a semantic point of view, the European Union already benefits from a power resource made by a significant acquis and a recent elaboration of a more coherent strategy. The acquis provides credibility to a more ambitious commitment, aimed at harmonising the external and internal dimension fo the EU security through two distinct but consonant articulations, respectively: the «European Security Strategy», ESS, and the «Strategy on the external dimension of justice and internal affairs». The author argues that this cultural-political development, explicitly inspired by the human security vision as nurtured in the United Nations milieux, is expected to improve the EU role as a «global actor» in the world political system, making it more credible and effective. The EU strategy tends to substantially differentiate from the «national security startegy» of the United States of America, that is from the American internationalism that means unilateralism, jerarchical intergovernmentalism, «global war» against terrorism. To fully put in practice the EU security policy, that emphasises the international law primacy and the United Nations centrality, a stronger political will of the EU member states is needed.

The EU huge involvement in the UN intervention in Lebanon could be the signal that such will is being reached. As regards the strong conditioning stemming from NATO the author writes that an appropriate division of labour should be negotiated making reference to the principles and provisions of the UN Charter (Chapters VII and VIII). Meantime, pending the ratification of the «European Constitution», the EU could actually implement the new strategy in the context of PESCPESD going on the analogy of what happened for the single currency, that is in accordance with the two speeds approach: to this purpose, for instance, Italy and France could give way to a «Saint Malo 2».