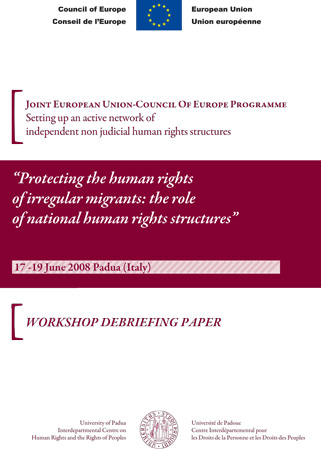 : University of Padua -Interdepartmental Centre on Human Rights and the Rights of Peoples

This publication summarises the ndings of the workshop on “Protecting the human rights of irregular migrants: the role of national human rights structures” which was organised in Padua (Italy) on 17 – 19 June 2008 within the framework of the so-called “Peer-to-Peer Project”, a joint programme between the Council of Europe and the European Union.

The main tool of the programme is the organisation of workshops for staff members of the National Human Rights Structures (NHRSs), in order to convey information on the legal norms governing priority areas of NHRS action and to proceed to a peer review of relevant practices used or envisagedthroughout Europe.

In accordance with a list of workshop’s topics previously agreed in consultation with NHRS contact persons, this second “Peer-to-Peer” workshop,which took place on 17–19 June 2008 in Padua (Italy), focused on “Protecting the human rights of irregular migrants: the role of national human rights structures”.

In particular, the aim of the workshop was to convey selected information on international legal standards applicable to irregular migrants.To this purpose, during the first session a flow chart of applicable rights to irregular migrants surrounding their arrival, stay and departure, was presented of CoE non EU countries such as Albania, Armenia, Azerbaijan, Bosnia and Herzegovina, Georgia, Montenegro, the Russian Federation (including the Federal Ombudsman of Russia), Serbia (including the Deputy Provincial Ombudsman of Vojvodina) and Ukraine, as well as from Kosovo.The good mix of speakers background (including staff of NHRSs, NGO representatives, practitioners, academicians and government representatives)and the order of topics presentation, which followed the initial flow chart of applicable rights, resulted in a participants discussion quite relevant to the work of NHRSs.

In particular, it was outlined the ever growing phenomenon of irregular migration, on the one hand, and the ever growing restrictive policies of governments, on the other. In addition, the experts’ contributions and discussion among participants allowed for a thorough review of the most recent Directive of the EU Parliament and Council on common standards and procedures on returning illegally staying thirdcountry nationals. It is to be noted that on the very day of the workshop the Directive was discussed and approved by the EU Council. While it is clear that EU Directives aiming at a common approach in this matter are necessary, a number of criticisms were expressed by participants towardsthe lack of a human rights dimension in the measures proposed in this directive’s minimum standards.

Moreover, it was noted the tendency in some EU countries, while transposing Directives into the national legal system, to lower even further the EU standards to the minimum extent possible.The EU, CoE and OSCE policies on anti-trafficking in the context of the irregular migration were also presented to participants. As a follow up to this event, it was decided to produce this workshop debriefing paper which provides practical information to the NHRSs and and explained to the participants.

The working sessions focussed on three interrelated situations relevant to irregular migration, from the time of the possible rescue at sea up to the event of repatriation.The two-day workshop was attended by a total of 39 persons, including participants, speakers and organisers. Participants were mainly from NHRSs.