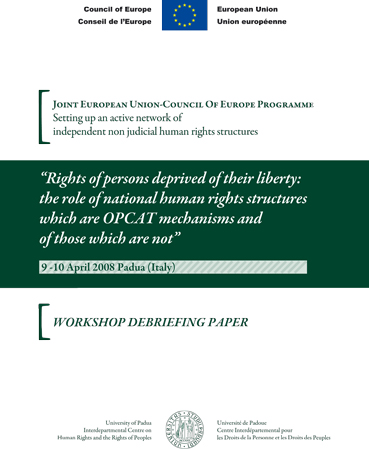 Rights of persons deprived of their liberty: the role of national human rights structures which are OPCAT mechanisms and of those which are not

This publication summarises the ndings of the workshop on the “Rights of persons deprived of their liberty: the role of national human rights structures which are OPCAT mechanisms and of those which are not”, which was organised in Padua (Italy) on 9-10 April 2008 within the framework of the so-called “Peer-to-Peer Project”, a joint programme between the Council of Europe and the European Union.

The main tool of the programme is the organisation of workshops for staff members of the National Human Rights Structures (NHRSs), in order to convey information on the legal norms governing priority areas of NHRS action and to proceed to a peer review of relevant practices used or envisaged
throughout Europe.

The 9-10 April 2008 workshop was the first of three events, which were organised in 2008 in Padua by the Human Rights Centre in co-operation with the Office of the Commissioner for Human Rights, and focussed on the “Rights of persons deprived of their liberty: the role of national human rights structures which are OPCAT mechanisms and of those which are not”.

The aim of the workshop was a) to convey selected information on the notion of ill-treatment and relevant international standards and mechanism to prevent and punish torture and other forms of ill-treatment and b) to promote a peer-to-peer discussion on the role of NHRSs vis à vis the obligation for each State party to the Optional Protocol to the UN Convention against Torture (OPCAT) to establish a new or designate an already existing institution as OPCAT National Preventive Mechanism (NPM). The two-day workshop was attended by a total of 62 persons, including participants, speakers and organisers. Participants were mainly from NHRSs of CoE non EU countries such as Albania, Armenia, Azerbaijan, Bosnia and Herzegovina, Georgia, Montenegro, the Russian Federation, Serbia (including the Provincial Ombudsman of Vojvodina), the Former Yugoslav Republic of Macedonia and Ukraine, as well as from Kosovo.

Concerning the establishment or designation of NPMs, experiences made by NHRS colleagues from other CoE member States were presented, thus facilitating a peer-to-peer contribution to the discussion on obstacles encountered and new avenues that might be tried in taking effective measures to enhance the role of NHRSs in the prevention of ill-treatment.

As a follow up to this event, it was decided to produce this workshop debriefing paper which summarizes the findings of the workshop and provide practical information to the NHRSs and references to documents concerning the role of NHRSs in the field of prevention of ill-treatment4. The contributions of a number of experts, who had participated in the workshop, were further developed and updated to be included in this document. Informationprovided in each chapter is complemented with quotations from relevant material published on this topic by the Association for the Prevention of Torture (APT).

Rights of persons deprived of their liberty: the role of national human rights structures which are OPCAT mechanisms and of those which are not (Stefano Valenti - 2009)