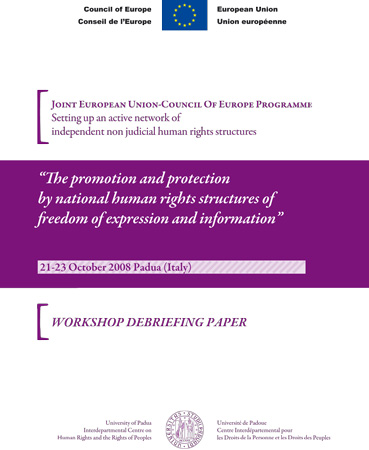 This publication summarises the ndings of the workshop on ““e promotion and protection by national human rights structures of eedom of expression and information” which was organised in Padua (Italy) on 21 – 23 October 2008 within the framework of the so-called “Peer-to-Peer Project”, a joint programme between the Council of Europe and the European Union.

Co-financed by the Council of Europe (CoE) and the European Union (UE), the “Peer-to-Peer Project” consists of a work programme to be implemented, by the Council of Europe’s Directorate General of Human Rights and Legal Affairs (DGHL) and the Interdepartmental Centre on Human Rights and the Rights of Peoples of the University of Padua2. The mainb tool of the programme is the organisation of workshops for staff members of the National Human Rights Structures (NHRSs), in order to convey information on the legal norms governing priority areas of NHRS action and to proceed to a peer review of relevant practices used or envisaged throughout Europe.

This workshop focused on “the promotion and protection by national human rights structures of freedom of expression and information” and was organized on 21-23 October 2008 in Padua (Italy). The event was attended by a total of 34 persons, including participants, speakers and organizers.

The participants at the workshop represented the following NHRSs: Albania, Armenia, Azerbaijan, Croatia, Spain, Georgia, Greece, Montenegro, Russian Federation (representatives of regional Ombudsmen), Slovenia, Serbia (including the Provincial Ombudsman of Vojvodina) and Ukraine, as well as Kosovo. The office of the Catalan Ombudsman was also present in its position of representative of the International Institute of Ombudsman.