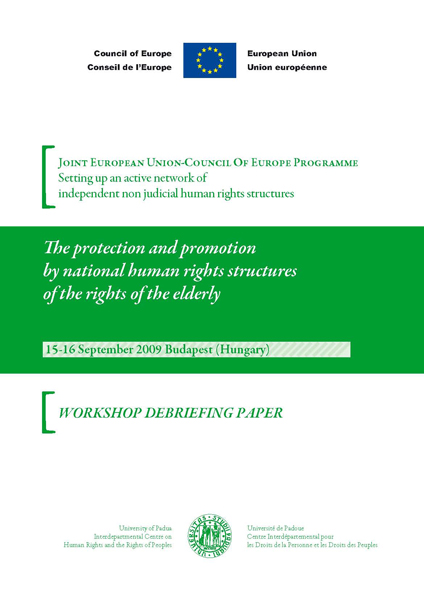 A. The Revised European Social Charter

B. Article 23 of the Revised European Social Charter

A. European Policies and Practices in Europe

B. Right to independent living/personal autonomy through social and family relations: positive obligation by the State

Chapter 3 - The rights of elderly people living in institutions

A. Article 23 of the Revised European Social Charter

B. The Standards of the European Committee for the Prevention of Torture

Conclusions - The role of the NHRSs

The workshop was the fourth to be organised in 2009 by the National Human Rights Structures (NHRSs) Unit of the Directorate General of Human Rights and Legal Affairs of the Council of Europe (CoE), under the Joint EU-Council of Europe "Peer-to-Peer Project" for the attention of heads and staff of ombudsman offices and national human rights institutions.

The event was attended by a total of 40 participants, including 32 NHRSs Representatives. The discussions were structured following the three parts of Article 23 of the Revised European Social Charter (ESC), a provision accepted by 21 of the 47 member States of the Council of Europe .

It was acknowledged that the ideal definition of who is considered an "elderly person" would be a functional one that would take into account a person's individual needs. However, for reasons of feasibility authorities often resort to the simplifying criterion of age, most often retirement age, which varies from country to country and is not the same for both genders or different professions.

The discussion among NHRSs focussed on the recent trend, by a number of welfare policies and legislations, towards a widespread institutionalisation of elderly people. This warring trend, which ignores fundamental principles of dignity, autonomy and eventually human rights, was considered inappropriate. It was also deemed contrary to the right to private life in combination with the right not be discriminated against.

NHRSs shared information about relevant national legislation and practices affecting the rights of elderly. It was evident from the discussion that especially Ombudsmen deal with a great number of complaints from, or on behalf of, elderly people. Many complaints simply concern delays in the payment of pension by the administration or the inadequacy of the amount of social pensions to cover basic needs of elderly people. Some NHRSs denounced the growing gap between the standards set by social care legislation and their implementation: a gap due to financial constraints affecting the social services' efficiency. In some instances, NHRSs had to intervene because the relevant authorities were not giving due regard to elderly persons' frailty, medical condition or general incapacity when assessing the claimant's entitlement to a benefit.

In light of this situation, a cross-cutting theme of the workshop was the right to respect of one's dignity as defined by the different international instruments and the positive obligations that it imposes on the authorities. The existence of limits of those positive obligations, in terms of resources at the disposal of the authorities, was acknowledged, but could not lead to exempting States totally of their responsibilities.

As a follow-up to this event, it was decided to produce this workshop debriefing paper, which is sketched out around the three sessions of the workshop. The publication aims at summarizing the findings of the workshop and at providing practical information on the protection of the rights of elderly by the NHRSs, as well as references to documents concerning the topic.