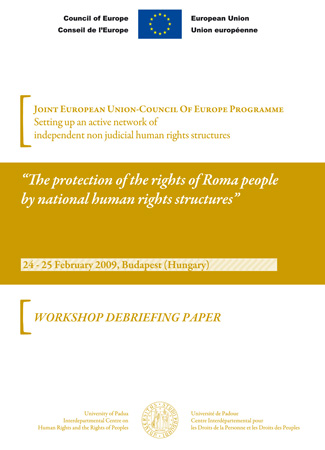 This publication summarises the findings of the workshop on “The protection of the rights of Roma people by national human rights structures”, which was organised in Budapest (Hungary) at the European Youth Centre of the Council of Europe on 24-25 February 2009 within the framework of the so-called “Peer- to-Peer Project”, a joint project between the Council of Europe and the European Union.

The Joint European Union – Council of Europe Programme “Peer-to-Peer Project”, aims to empower national human rights structures (NHRSs) to help prevent and find solutions to human rights violations more effectively at domestic level. Through a series of workshops, where international legal norms are explained and participants discuss their respective experiences to implement these norms, specialised staff members of the NHRSs can strengthen their own human rights competences and increase their awareness of the possibilities for action at domestic level and for co-operation with international mechanisms.

In 2009, the first workshop of the “Peer-to-Peer Project” was organised on “the protection of the rights of Roma people by national human rights structures” on 24-25 February in Budapest (Hungary) at the European Youth Centre of the Council of Europe. The workshop focused on three specific aspects of the many problems affecting the Roma people.

During the first session, participants, with the help of experts’ presentations, identified obstacles and venues to combat the almost chronic social exclusion of Roma and lack of their participation in the decision making process, which put them on the fringe of the structured societies.

The second session aimed at giving an overview of the international legal standards and mechanisms concerning the housing rights. It was noted by participants that the patent absence of adequate standards of living among the Roma population is an unfortunate common denominator characterising Roma settlements throughout Europe. In this context, several Council of Europe (CoE) member States have been found by CoE monitoring mechanisms in breach of their treaties obligations regarding the housing rights of Roma.

The last session covered the issue related to the education of Roma children, in particular from the perspective of discrimination and segregation in the school system. The participants’ discussion highlighted the link between lack of proper education and lack of proper documentation, as well as poor accommodation facilities, which very often are quite distant from school buildings.

The discussion, which took place after each expert’s presentation, showed that this issue is of particular interest to NHRSs. Despite difficulties experienced in successfully protecting the rights of this vulnerable group, the NHRSs seem to have a potential advantage in tackling the specific problems addressed in the workshop. As a possible model for an inventory of measures to be adopted in the three specific workshop’s themes, mention was made to the relevant recommendations given by the Commissioner for Human Rights of the CoE in his 2006 report on the human rights situation of Roma, Sinti and Travellers.

As a follow up to this event, it was decided to produce this workshop debriefing paper, which summarizes the findings of the workshop and provides practical information to the NHRSs and references to documents concerning their role in protecting the rights of Roma people. Each chapter lists points most relevant to the topics and discussions of the workshop, including summaries of experts’ contributions.