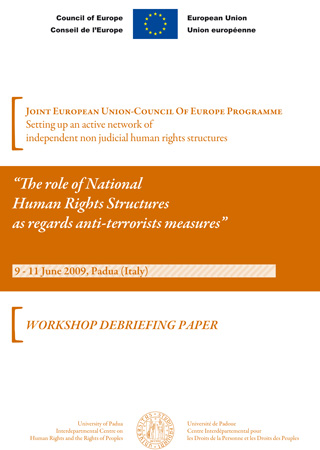 This publication summarises the findings of the workshop on “The role of National Human Rights Structures as regards anti-terrorists measures”, which was organised in Padua (Italy) on 9 –11 June 2009 within the framework of the so-called “Peer- to-Peer Project”, a joint project between the Council of Europe and the European Union.

Introduction
The Joint European Union – Council of Europe Programme “Peer-to-Peer Project”, aims to empower national human rights structures (NHRSs) to help prevent and find solutions to human rights violations more effectively at domestic level. Through a series of workshops, where international legal norms are explained and participants discuss their respective experiences to implement these norms, specialised staff members of the NHRSs can strengthen their own human rights competences and increase their awareness of the possibilities for action at domestic level and for co-operation with international mechanisms.

In 2009, the third workshop of the “Peer-to-Peer Project” was organised on “The role of National Human Rights Structures as regards anti-terrorists measures” in Padua (Italy) on 9–11 June. The workshop consisted of an opening session and three working sessions, corresponding to three specific aspects of the general issue, where NHRSs have an important role to play The first working sessions dealt with counter-terrorist measures and the rights of members of the public at large, with a specific focus on arbitrary procedures for terrorist black-listing and potential violation of the right to privacy, the right to property, the right of association, the right to travel and freedom of movement; correlation between counter-terrorist measures and the protection of the freedom of the media; correlation between counter-terrorist measures and freedom of expression, in particular the crime of apology of terrorism and incitement to terrorism.

The third and last session dealt with the protection of the rights of suspected or convicted terrorists, with a specific focus on the respect for the absolute prohibition of torture, also in connection with extradition and expulsion, arrest and detention of terrorists, their right to a fair trial and the fairness of the penalties applied to them.
There were 32 participants representing NHRSs mainly from non EU Countries, in addition to experts and organisers.

As a follow up to this event, it was decided to produce this workshop debriefing paper, which summarises the findings of the workshop and provides practical information to the NHRSs and references to documents concerning their role. Each chapter lists points most relevant to the topics and discussions of the workshop, including summaries of experts’ contribution to the workshop.