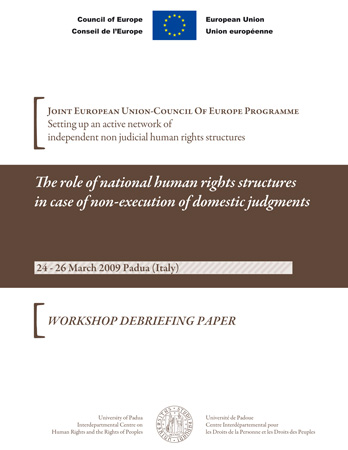 This publication summarises the findings of the workshop on “The role of national human rights structures in case of non-execution of domestic judgments”, which was organised in Padua (Italy) on 24 - 26 March 2009 within the framework of the so-called “Peer- to-Peer Project”, a joint project between the Council of Europe and the European Union.

The non-execution of judgments of domestic courts by the authorities of their own country constitutes not only a breach of domestic law and legal principles, but also a breach of the right to a fair trial, as contained in Article 6 of the European Convention on Human Rights (ECHR).

For example, in its judgment in the case of Hornsby v. Greece of 19 March 1997, the European Court of Human Rights (Court) affirmed that the “right to a court” “would be illusory if a Contracting State’s domestic legal system allowed a final, binding judicial decision to remain inoperative to the detriment of one party. It would be inconceivable that Article 6 para. 1 should describe in detail procedural guarantees afforded to litigants - proceedings that are fair, public and expeditious - without protecting the implementation of judicial decisions; to construe Article 6 as being concerned exclusively with access to a court and the conduct of proceedings would be likely to lead to situations incompatible with the principle of the rule of law which the Contracting States undertook to respect when they ratified the Convention”. Furthermore the Court observed that the administrative authorities form one element of a State subject to the rule of law and their interests accordingly coincide with the need for the proper administration of justice. Where administrative authorities refuse or fail to comply, or even delay doing so, the guarantees under Article 6, enjoyed by a litigant during the judicial phase of the proceedings, are rendered devoid of purpose.

Many structural problems are revealed by non execution of domestic judgment cases, as it was demonstrated during a round table entitled “Non-enforcement of domestic court decisions in Council of Europe member  states: General measures to comply with European Court of Human Rights judgments” that was organised by the Council of Europe.

These structural problems resulted in a high number of violations of the ECHR in certain States revealing a problem of non-compliance by the State and its entities with domestic court decisions and causing the steady influx of new complaints to the Court in this respect. Therefore there are a great number of judgments of the European Court that concern the non execution of domestic judgments in several member States. Recently, the Court delivered a judgement concerning Russia on the non-enforcement or delayed enforcement of final domestic in the case of Burdov v. Russia (no. 2).

In a more general perspective, the lack of proper enforcement of judicial decisions severely affects the efficiency of the State structures, frustrates the citizens’ legitimate expectations and their confidence in the judicial system, the rule of law as well as the effective implementation of human rights in general. This topic therefore seems to lay in the heart of the competencies of ombudsmen and national human rights institutions (NHRSs).