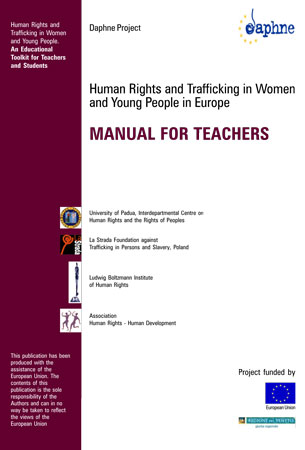 Human Rights and Trafficking in Women and Young People in Europe

In the last few years, Europe’s old and new countries have, with ever greater insistence, had the words human trafficking, smuggling, sexual exploitation of women, young people and children, new forms of slavery and servitude, on  heir lips.

Periodically, media reports give alarming figures on the number of victims of trafficking whose rights have been severely violated, or who were forced into grave forms of submission and exploitation. The credibility of the reports however, at times does not reflect the truth as there are factors at play that can influence assessment as: different way to formulate estimates of single countries, distinct legislations, different commitment on the part of  governments to monitor and combat such phenomena, and the close relationship between such conditions and illegal immigration, in addition to other elements that can also influence such assessment making a realistic and objective picture difficult.
In the last few years an increasing number of national, regional, and international governmental and non-governmental institutions and bodies have
been addressing the issue from a number of perspectives to produce periodic
reports that ought to serve to provide a clearer picture of the mechanisms
involved in this phenomenon including its rapid transformations.

Actually, from a political and cultural viewpoint, the theme of trafficking places
itself at the heart of a series of blistering issues as: migration, sexual violence,
multiple discrimination, cultural diversity, security, sex work, transnational
crime, and "globalization" -all problems that can certainly induce human
trafficking as inspired to ideological maxims or unacceptable forms of displaying pain that are of little use to solve the problems of those who are trapped in such situations. [...]