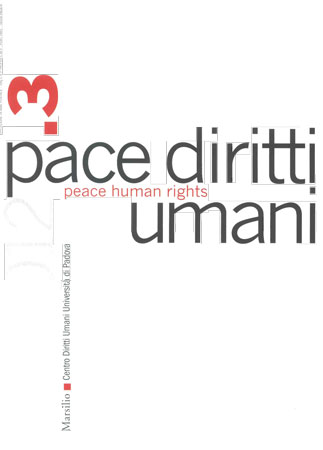 The Space of Fundamental Rights in Pre-unitarian Italy. The Venetian Rudimenta of Domingo Muriel (1791)

The article introduces to a text written by the Jesuit Spanish-born legal philosopher Domingo Muriel, Rudimenta juris naturae et gentium libri duo, published in Venice in 1791. It argues that the book epitomises a crucial moment in the history of the reception of the natural law human rights discourse in the Italian tradition. Muriel’s Rudimenta well represent a more general attitude that characterised the legal philosophy in the phase preceding the XIX-century nationalist shift in legal disciplines, when international and constitutional normative constructions still followed a global or largely pluralistic attitude. The era of written constitutions and law codes would lately discredit the universalistic Second Scholastic doctrine of natural law and jus gentium. The balanced approach adopted by Muriel (whose name was latinised as Cyriacus Morellus) was deeply influenced by the Catholic natural law doctrine (the Salamanca School), but it was also at ease with the secular natural law philosophy of authors such as Pufendorf and Heinecke. Muriel’s Rudimenta adopted a pluralistic approach in describing the dissolution of the Inca empire, whereby local native American institutions were assumed to co-exist, to a certain extent, side-by-side the Spanish imperial rule and the law of the New World state entities. This stance was particularly well received in the cultural and political environment of the XVIII-century Venice Republic. The article therefore argues that a history of the pre-unitarian Italian natural law legal tradition should not neglect the contributions of the Venetian school of natural rights, that includes not only Muriel’s seminal book, but also those of local authors and of scholars who published in Venice although academically active in other parts of Italy. The Rudimenta of 1791 restated the jusnaturalistic doctrine about the inter- or trans-temporal dimension of fundamental rights, as opposed to the positivistic cult of written, historically relative law, and articulated a rights-based legal discourse that did not uniquely rely on the State, but combines a plurality of territorial entities – including the continental and universal ones – as normative sources. From this perspective, the post-positivistic era.