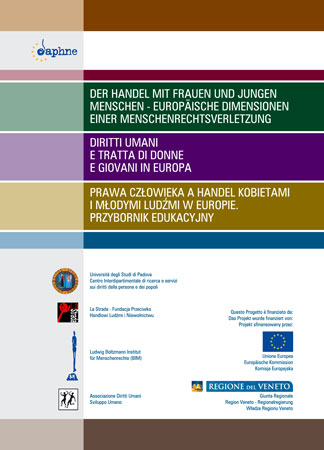 Human Rights and Trafficking in Women and Young People in Europe

An Educational Toolkit for Teachers and Students

The project objectives and recipients

The Project Human Rights and Trafficking in Women and Young People. An Educational Toolkit for Teachers and Students is funded by the European Commission, DG Justice, Freedom and Security, in the framework of the Daphne Programme II (Decision No 803/2004/EC of the European Parliament and of the Council of 21 April 2004 adopting a programme of Community action (2004 to 2008) to prevent and combat violence against children, young people and women and to protect victims and groups at risk) and by the Veneto Region, Italy. The Project was undertaken by the Interdepartmental Centre on Human Rights and the Rights of Peoples of the University of Padua, (Italy) in partnership with the Ludwig Boltzmann Institute of Human Rights (BIM) of Vienna, (Austria), the Association Human Rights- Human Development (ADUSU) of Padua (Italy) and the La Strada Foundation (a Foundation against Trafficking in Women) of Warsaw (Poland).

The goal of the Project is to inform and to raise the awareness of high schools teachers and students on issues of human rights and human trafficking for the purpose of sexual exploitation by means of an educational Toolkit.

The educational Toolkit contains information material and methods that can help teachers acquire the basic knowledge on the issue and stimulate in students different levels of consciousness regarding human trafficking for sexual exploitation.

The Project represents also an opportunity to build an educational school system model and enables the phenomenon to be explored from a human rights perspective within a holistic and integrated framework - as suggested by the Experts Group on Trafficking in Human Beings of the European Commission.

The Project has been developed in Austria, Italy and Poland using a series of activities as: a survey on already existing didactic material on the topic in the three countries, seminars with high school teachers conducted at a national level, a series of interviews in the three countries to subjects who are involved at different levels with the issue, (NGO’s, police, judges, social workers, and lawyers…).

The direct beneficiaries of the Project are women and young people who are the victims or potential victims of trafficking for sexual exploitation. The awareness-raising activities in fact, may serve as an important prevention scheme.

The indirect beneficiaries are all victims of trafficking, independently of the nature of the exploitation, the age and sex of the victim.

The Project also contributes to develop a more conscious social context towards human rights violations, human trafficking and the existential conditions of victims.

Thus, the Project could also help potential victims of trafficking recognize, in advance, situations of risk.

Human Rights and Trafficking in Women and Young People in Europe ( AA.VV. - 2007)